Launched in late 1979, Usenet is the first non-governmental platform-agnostic computer communication network. Discussion on Usenet was organized around a system of distributed discussion groups, or newsgroups. At first, all newsgroups used the prefix net.* (such as net.singles), but in 1987 were reorganized during the Great Renaming into the Big Eight hierarchy: comp.*, humanities.*, misc.*, news.*, rec.*, sci.*, soc.*, and talk.*. All new newsgroups in the Big Eight required a proposal and a successful 2/3 vote by Usenet administrators. As a result, the "unofficial" alt.* hierarchy was added. Newsgroups in alt.* did not require approval, which sometimes led to the proliferation of spoof or parody groups like alt.swedish.chef.bork.bork.bork.

Usenet messages were initially distributed primarily via host servers connected to ARPANET, but by the early 1990s became accessible through a variety of different kinds of connections, including BBS network FidoNet and most major commercial services like AOL and CompuServe. Beyond its longevity, Usenet's historical significance comes from its place as the source and popularizer of many modern internet terms or phenomena, including the FAQ, the terms "flame" and "flaming," "sockpuppet," and the very first instance of "spam."

Though Usenet still exists and some newsgroups remain active, overall use declined throughout the mid-2000s, as existing users moved to primarily communicating via social network sites and were not replaced by new users. 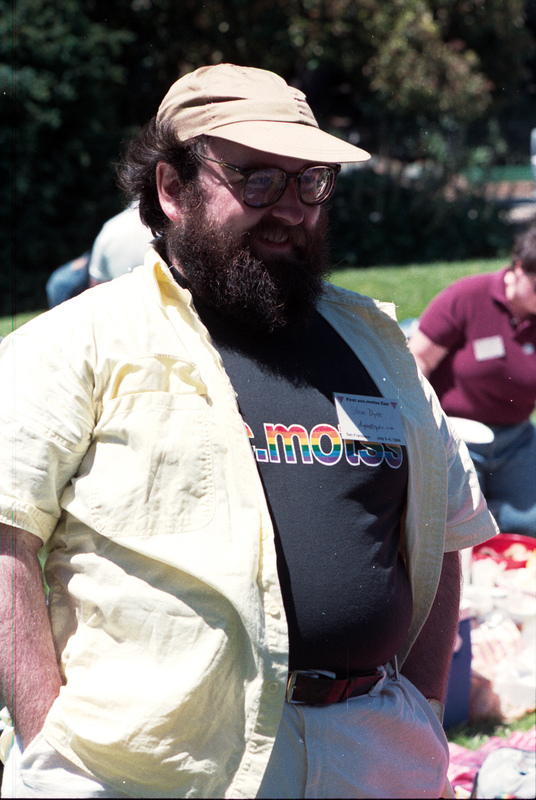 Founder Steve Dyer in a "soc.motss" shirt at the first motss.con in 1988. Courtesy of Billy Green on Flickr.

The first queer specific newsgroup, net.motss, was founded in 1983 by Steve Dyer. Though there'd been some discussion of creating a gay and lesbian-specific newsgroup, some administrators worried propagating a newsgroup with the name "net.gay" would be seen as tacit approval of "inappropriate" content. Thus, Dyer used an acronym for "members of the same sex" (motss) commonly used in net.singles to limit the risk of limited propagation.

Within a year, net.motss had developed into a thriving community of users. For some, net.motss was the first place where they felt comfortable coming out as gay. A few years after its founding, regular members began meeting up at in-person industry events such as USENIX conferences. These meetups led to the first motss.con in San Francisco in 1988 (the group would be renamed soc.motss as part of the Great Renaming in 1987), eventually becoming an annual tradition for regular users. As with most newsgroups, activity in soc.motss slowed throughout the 2000s, but motss.con continues to be held. 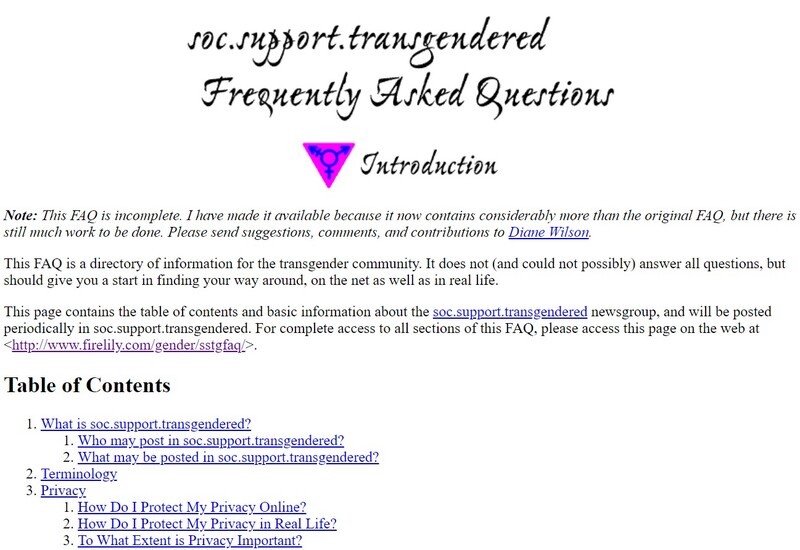 Screenshot of the web version of the SST FAQ, first archived January 24, 2001.

alt.transgendered was founded in late 1992 in reaction to the creation of an “unapproved” newsgroup, "alt.sex.trans." Concerned that the group’s alt.sex designation, which was commonly associated with erotica groups, meant it would not be widely distributed, alt.transgendered was created two days later. According to Usenet administrator Brian Reed’s semi-monthly Usenet readership survey, which tracked a variety of metrics for highly active newsgroups, From January 1993 to July 1995, alt.transgendered averaged an estimated 21,130 readers worldwide and was received by a little under half of all Usenet servers.

alt.transgendered (sometimes shortened to alt.t) would eventually be joined by soc.support.transgendered (SST) in 1994. Unlike alt.t, SST was part of the official Big Eight, which required proposers to develop a detailed rationale for the group. The SST FAQ described the two groups' differences: "The consensus has been that this newsgroup, being in the "mainstream" big 8 hierarchies, is focused more on giving advice and support, and that the "alt" newsgroups are a more appropriate place for discussions about the philosophy of crossdressing and transsexualism (e.g., alt.transgendered). In relation to several newer newsgroups, the role of soc.support.transgendered has become more general and community-based, while the alt.* groups are for more specialized issues within a particular subject area." 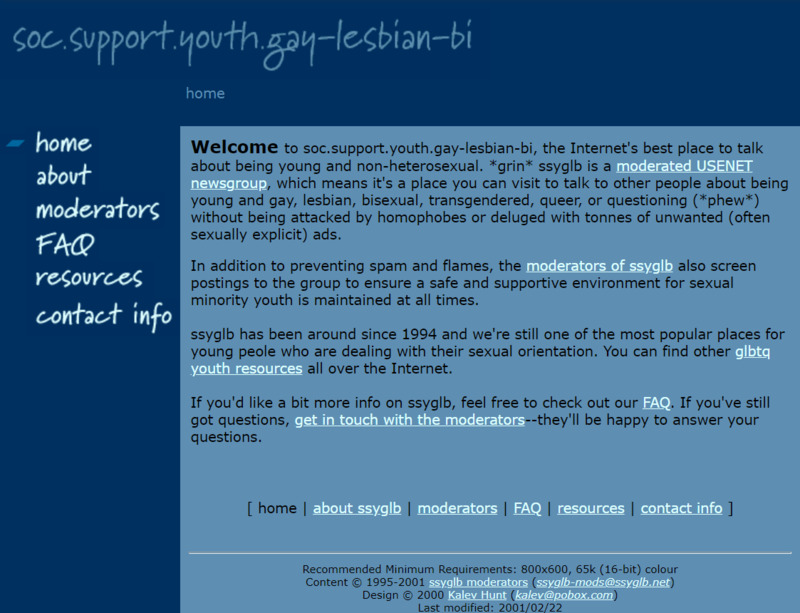 Screenshot of ssyglb.org, archived May 2002.

The idea for soc.support.youth.gay-lesbian-bi (often abbreviated as SSYGLB) first emerged out of a meeting at the San Francicso LYRIC Center between several early moderators. They were interested in the possibility of creating a safe space online similar to what they were creating offline through LYRIC, which led them to the idea of a moderated newsgroup. The group was officially created in 1994 and remained active until 2007, when the moderators stopped approving new posts. Throughout its lifetime, the group remained a youth-centered space, including being consistently moderated by LGB individuals under 25.

The catalog pages for all of the newsgroups referenced above include a variety of information and references. For more general information on Usenet, these articles offer good overviews.