The Bulletin Board System (or BBS) is one of the earliest publicly available computer-based digital communication media. Specially designed BBS software allowed a microcomputer to be used as a server other users could dial into via modem. Logged in users could access all of a given board’s available functions, including downloading files, sending and receiving messages, playing games, or synchronous chat. Given the high cost of repeat long-distance calls, most visitors to a BBS lived within the BBS's geographic area code. Many of modern social media first appeared on the BBS.

BBSes first emerged in the late 1970s with the 1978 launch of "Ward and Randy’s Computerized Bulletin Board System (CBBS)," developed by Ward Christensen and Randy Suess, members of the Chicago Area Computer Hobbyist’s Exchange (CACHE). Interest amongst computer hobbyists grew throughout the 1980s, and a variety of different BBSes emerged, including ones specifically aimed at individuals within the LGBTQ community (see notable examples below). In 1984, Tom Jennings founded the first network connecting BBSes, FidoNet. Initially, member boards (or nodes) came largely from within the US, but over time expanded internationally.

Interest in BBSes peaked in the mid-1990s. The rise of the World Wide Web and browsers, however, led to their rapid decline. While BBSes had a variety of important features, they lacked the Web’s broad appeal and the Internet’s ability to allow simultaneous server connections. While most BBSes eventually went offline, some larger commercial boards like ExecPC BBS shifted to acting as local Internet Service Providers. 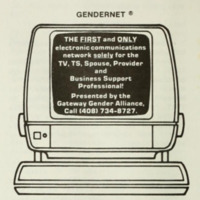 Advertisement from TV-TS Tapestry #42 when the board was first announced.

On January 1, 1984, the first BBS for the “gender community,” GenderNet, went “live.” GenderNet was sponsored by the Gateway Gender Alliance, a California-based non-profit with a small handful of chapters across the US from 1983-1986, when it ceased operations. However, the BBS appears to have remained active until 1989. GenderNet's offerings included a file library, a GGA member directory, and several regular advice columns. In 1985, the BBS was prominently featured in a Playboy article by Rober E. Carr on accessing adult content via computer, which led to the first mention of a trans-specific online forum in a government document, a one-sentence reference in Part 4, Chapter 8 of the Attorney General's Commission on Pornography: Final Report (1986), colloquially known as the Meese Report. 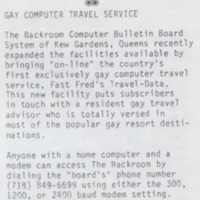 Item of interest in RFD #45 (Winter 1985) on The Backroom's then-new travel service. 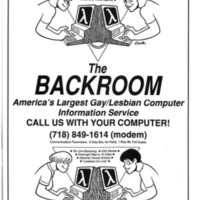 Advertisement from Issue 55 of Outweek Magazine (July 18, 1990). The illustrations were done by gay cartoonist Howard Cruse, best known for his 1995 graphic novel Stuck Rubber Baby, which follows a young man coming to understand his gay identity in the Deep South during the 1960s.

The New York-based Backroom was one of the earliest gay-specific BBSes in the United States. Like many BBSes, the Backroom offered a variety of topical forums, but the most well-known was SURVIVORS. Co-moderated by David Charnow, SURVIVORS offered a safe space for PWAs (People With AIDS) to share resources, communicate, and build community. Printed copies of messages from SURVIVORS are held in the ONE National Gay & Lesbian Archives. Beyond its fora, the Backroom also hosted a semi-regular in-person gathering, the Backroom Bash. It was also the primary host BBS for the gay and lesbian BBS network GayCom. 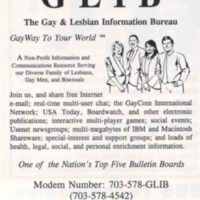 Advertisement for GLIB from March 1995 issue of Boardwatch Magazine. 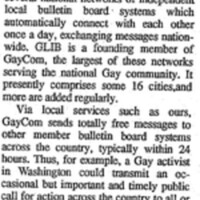 The letter from Jon Larimore about GLIB and GayCom BBS network was  published in the September 1, 1989 issue of The Washington Blade. 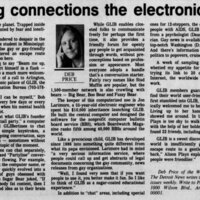 In this 1994 syndicated column, columnist Deb Price talks with GLIB users about what the board means to them. From White Plains, NY-based Journal News (January 20, 1994). Clipping via Newspapers.com. 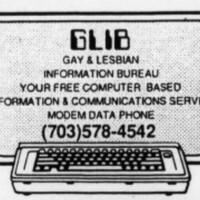 Classified advertisement for GLIB from the October 18, 1991 issue of The Washington Blade.

Founded in 1986, Arlington, VA-based GLIB was among the most prominent early gay and lesbian BBSes in the United States. In 1993, it ranked as #5 in industry trade magazine Boardwatch's "Top 100 Boards" poll—a rare feat given the prominence of non-community-specific boards within the field. GLIB offered a variety of features common to BBSes, including messaging, chat, a file library, access to content from major US publications, and games. 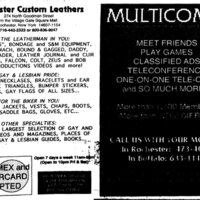 Advertisement for Rochester Custom Leathers and Multicom-4, one of several that ran in The Empty Closet, Rochester, NY (September 1989 to January 1999) 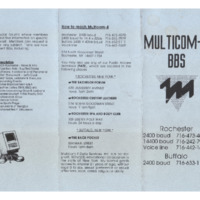 Unlike The Backroom and GLIB, Rochester, NY-based BBS Multicom-4 did not begin as a gay and lesbian BBS, but when sysop Chaz Antoneeli came out in the late 1980s. MC-4 held regular in-person gatherings, and maintained free terminals in locations in Rochester and Buffalo, where prospective members could access areas of the board for free.

Throughout MC-4’s history, Antonelli resisted ever commercializing the board, and Multicom-4 fully incorporated as an official 501(c)(3), 509(a) non-profit in the 1990s. The BBS used a member-centered model similar to Public Broadcasting in the United States: users paid for extra time via donations, and all users were referred to as ‘members.' When members ran out of free hours, they could earn more by serving as on-call volunteer tech support for other members.

The catalog pages for all of the BBSes referenced above include a variety of information and references. For more general information on the BBS, these are good overviews.