Tom Jennings is a Los Angeles-based artist and programmer. Jennings began calling into BBSes in 1980, when he used an acoustic coupler, an early consumer-grade modem,  to call up CBBS (the first BBS, founded in Chicago). Early in his career at the Boston-based Phoenix Software, Jennings created a portable BIOS (Basic Input/Output System) that allowed non-IBM PCs to run Microsoft's MS-DOS operating system.

In 1984, he designed and launched the first message and file exchange system for BBSes, FidoNet. From 1988 to 1991, he also served as publisher and co-editor of the early influential Queercore zine Homocore. In 1992, he co-founded (with John Gilmore), The Little Garden, one of the earliest internet service providers (ISPs). 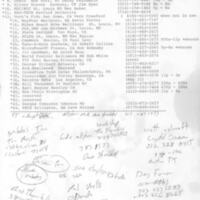 A scan of one of the weekly list of pre-FidoNet Fido Message boards, including the welcome message Fido BBS #1. Scan originally uploaded by Tom Jennings and used under the Creative Commons Attribution-Share Alike 3.0 Unported license. 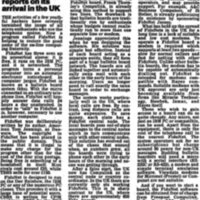 Article from The Guardian (October 24, 1985) covering FidoNet's introduction to the UK. Clipping via Newspapers.com. 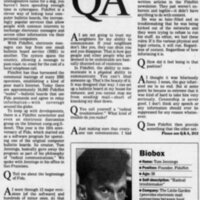 Part 1 of an interview in the Los Angeles Times (August 3, 1994) with Tom Jennings on FidoNet. Clipping via Newspapers.com. 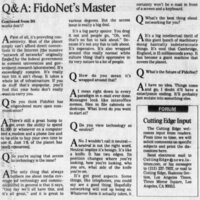 Part 2 of an interview in the Los Angeles Times (August 3, 1994) with Tom Jennings on FidoNet. Clipping via Newspapers.com.

Jennings launched his first BBS, Fido, in early 1984. Over the next few months, other boards began to join the informal Fido network. Fido was most notable for its built-in communication capabilities, which used a store-and-forward system to allow board users to exchange both private emails and and public forum messages, as well as files and protocols, between BBSes. Files were "stored" during the day and then "forwarded" overnight via telephone line to other nodes on the network, in order to take advantage of cheap call rates.

As more and more boards began using the Fido software, the network was eventually formalized, with each BBS, or node, being given a specific numerical label. Over time the network grew, and by April 1993, the offcial nodelist of member BBSes included over 20,000 systems, each with an estimated average of 200 active users—adding up to about 2 million total users. FidoNet adoption would peak in the mid-1990s, gradually declining as Internet adoption grew.

Jennings had long been involved in anarchist and punk spaces and was inspired to create the zine after attending the 1988 Anarchist Survival Gathering in Toronto. While queer punks were active within the hardcore scene, they didn't have an space that specifically centered their interests—which Jennings hoped to change with Homocore.

The first two issues each had print runs of 500 issues, but doubled to 1000s by #3. The zine ultimately ran for 7 issues, from 1988 to 1991, all of which Jennings edited with his friend Deke Motif Nihilson, who he'd first met at the Toronto gathering. Through its relatively short run, Homocore played an important role in fostering the West Coast queercore scene.

Logo for The Little Garden. An archived copy of TLGnet's website can be found here.

In the early 1990s, only the largest corporations could get access to the ARPANet (which would later become a key part of the publicly accessible Internet). Jennings, along with two partners, maintained an early "unofficial" connection hub, which allowed individuals to access ARPANet for a set cost, which went to covering the monthly leasing fee at $70 a user. Eventually the number of users became so large they were forced to formally incorporate in 1992 as The Little Garden (later TLGNet, Inc.), named after a Palo Alto Chinese restaurant they frequented.

As a commercial internet service provider, TLG differed from competitors in its focus on providing bulk, full time connections with no restrictions on how subscribers used their connections. This last stance reflected the founders' "explicit social/political goal[s]," as reflected in their Terms of Service:

"TLGnet exercises no control whatsoever over the content of the information passing through TLGnet. You are free to communicate commercial, noncommercial, personal, questionable, obnoxious, annoying, or any other kind of information, misinformation, or disinformation through our service. You are fully responsible for the privacy of, content of, and liability for your own communications."

In a similar vein, TLG frequently hired individuals from the local queer and punk communities. Though most did not begin with technical backgrounds, TLG provided on-the-job training and health insurance.

TLG continued to grow until its infrastructure needs were greater than what could be maintained at its current income level. In 1996, TLG was sold to the Mountain View-based Best Internet Communications.

Interviews, Secondary Material, and Other Works